Chardonnay and Pinot noir are the most widely used varieties in the world. Savagnin, Trousseau and Poulsard are typical Jura varieties.

Originating from Burgundy, the Chardonnay is found in the Jura since the XIV century under different names as Gamay blanc, rousette or melon. Today, it is the most representative variety and covers 48% of the vineyards. Because of its strong capacity of adaptation it is very present not only in French vineyards but also in other countries. This variety is not very demanding and can grow in light soil, with gravel, calcareous clay or even in strong soils. The one main disadvantage of the plant is its sensibility to rain (washing away the small flowers) and the small bunch of grappes.

At our Le Vernois property, the Chardonnay is planted on limestone hillslopes with emerging marl. The production is 40 hl / ha. The Chardonnay has a strong and pronounced taste, typical of the Jura wine, or if assembled with the Savagnin variety gives the Tradition wine.

We can also find the Chardonnay in the lower parts of the hill slopes on more fertile soils producing 60 hl / ha, these grapes are used for the more delicate Cremants. 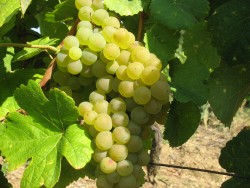 This variety came from Germany when the region was then under Spanish-Austrian authority. In German countries it is better known as Traminer. Adult leaves are small with three parts and with pointed opened petiole, bubbled limb and sometimes embossed. The berries are small, spherical and of a yellow-gold colour. The Savagnin is well adapted on marl soil as the one of the Jura. Because the leaves are thick, it is a particularly resistant plant with less grey rotting and diseases affecting it.

The Savagnin is ideal for the production of the Vin Jaune, because of its late maturity. The berries are excellent for the vintage white wine with long keeping potential, complex and quite rich in alcohol with a good level of acidity.

The term “trousseau” comes from the shrinking aspect of the berry. Some humorous wine-makers found another origin by saying that this variety produces a wine with a long-term keeping potential in order to finance the trousseau of their daughters. In the Jura the variety dates around 1731, but it could also have been introduced one century before.

The bunch of grapes is small and the berries are of medium size with an elliptical form. It is a late variety and quite exacting. It requires a graveleux soil or not deep marl and need more sun than the other varieties, a relic of its southern origin. It is a quite fragile plant which suffers from cryptogrammic attacks, especially with grey rotting.

The result is a well structured wine with a purple colour, quite strong in taste with red fruity notes. The taste remains long in mouth. Certain bottles can be kept for more than 10 years. 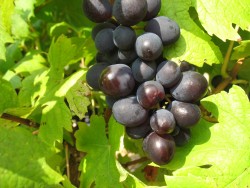 Its origin seems to be from Franche-Comté, the variety appearing around 1386, with the mention “Pullozar”, but the origin of the name is uncertain. It could come from a local word “plousse” or “prunelle”, the fruits strangely ressembling the Poulsard berries, typically from the Jura. Other existing names are peloussard, pulsard, polozard or even mescle in the region of l’Ain and ploussard in Arbois.

The young stems are not very hairy. Young leaves are yellow with bronze reflections. The main stem has very long spirals. The bunch of grapes are small and the berries are rather average to big with a blue-black elliptical form, fleshy with a thin layer therefore breaking easily. It is a delicate plant which can easily be damaged by spring gel, running water or “grillures”. It flourishes easily on marl and clay soils. Varieties with a heterogeneous production will be more adapted to the vintage effect.

The Poulsard plant gives fine aromatic wine with a fruity and strong taste (sort of “animal” taste) despite its light colour and structure. Its pale robe sometimes called “peel of onion” stays relatively stable during ageing. Poulsard is present in the label of origin Côtes du Jura and Arbois.

Poulsard covers more than 20 % in the A.O.C. label i.e. 80% of the plantation in red production. This variety flourishes mostly in soils strong in marl and Trias and Lias clay. 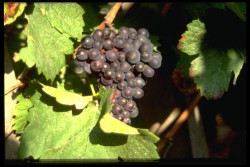 In Burgundy the Pinot Noir is well known as the genetic variability of this variety. It could come from wild vines selected and cultivated by the Romans. The extremity of the young plants presents a medium to strong density with hairy ends. The young leaves are green to yellow growing from a main branch with interknots with red stripes. Adult leaves are dark green to very dark green with 3 to 5 lobes and a half closed petiole, and on the rear side a small density of hairs. Pinot noir is one of the richest varieties in phenol composition.