On June 16th, 1919 Xavier Richard one of the producers of Le Vernois village purchases his neighbours’ property from the BON family. The main wine producer’s house was then an ancient bourgeois house dating from the beginning of the 18 th century.

At this period polyculture was practised to maintain a constant revenue for the family, wine-making not being prosperous enough to ensure living in good conditions, mostly because of spring hailstorms and frost.

After World War 2, one of the sons Jean, takes over the family property and decides to abandon polyculture; he specializes in wine making.

It is the time of replantation with “noble” vines in view of obtaining the label of the Controlled Designation of Origin (Appellation d’Origine Contrôlée). 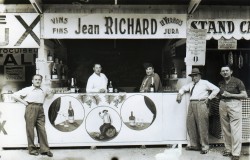 The Domain is then quite renown due to its presence on different local exhibitions and fairs. Since 1947 the Domain is also present at the Franc-Comtois exhibition in the town of Besançon and this confers a stronger notoriety in the region.

In 1976 Pierre Richard, Jean’s son, will pursue the management of the domain and Pierre will build its actual good image and strong reputation. He decides to acquire another property on the nearby commune of Mantry, and thus revives a hillslope rich of a vine growing past.

After his studies in Viticulture and Oenology in Beaune, followed by different work experiences in vineyards situated in Saint-Emilion and Côtes de Provence to complete his cursus, Vincent Richard returns in 2009 on the family property to perpetuate the activity.

In 2017 he starts working with his wife Emmanuelle and in 2018 they both decide to follow their deepest convictions and orientate the vineyard towards organic agriculture in order to obtain the certification under the control of the Ecocert French organism.

Today Vincent continues to develop the family tradition of wine making with a total of 11 hectares.

The Domain situated in the heart of the Jura between the Seille and the town of Lons Le Saunier benefits of a rich soil with a good predisposition for white wine.

This domain with small scale production produces a complete range of the Jura French wines.

This small village situated at 5 minutes north of Lons le Saunier is in the heart of the vineyards. The area offers the same type of soil as the one of the well known Château-Chalon. It is a major site in the Jura region comprising about ten very dynamic properties.

In the past, the slopes of the Vernois hillsides ended in a forest of alders named “VERN” by the Celtics. The name of Le Vernois comes from there.

In 1961, after a violet storm which destroyed the few existing tracks and paths in the vineyards, the vine-growers decided to operate the first land regroupment in France. They introduced a network of roads serving each and every parcel of land, thus ensuring a system of water drainage at the same time. 22 km of road and a hydraulic network are created then.

Extremely proud of our region, we welcome you at our property at Le Vernois “in the heart of the vineyards”. 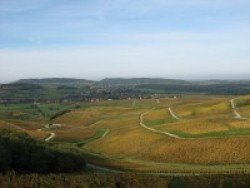